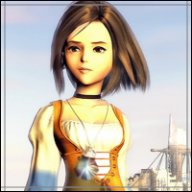 She Shoots for the Stars · 49 · From Somewhere east of Atlanta, GA

Last seen
30 minutes ago · Viewing thread Regarding the Voice Actor Switch for Kairi...