anyone notice facial similarities between larxene and F.S., and ESPECIALLY axel and E.S.?

perhaps they were the nobodies that got created???

i heard it was set in the past

i dunno, lots of stuff to consider but axel and E.S. look TOO similar in my opinion...

what do you think?

you never know and yes there is a slight resemblence between axel and the E.S. 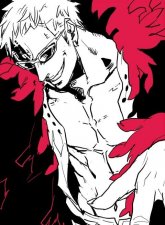 No, because you fight the ES after Axel dies. Plus, the ES said he hated Xehanort. I doubt Axel would worked with Xemnas if he was the ES' nobody. Plus, I really see no resemblments that would push it toward them being the same.
C

If Axel is ES' nobody than he might not have any memories (Like Xemnas with Xehanort) and I believe that the portal in the Hall of the Cornerstone takes you in the past to fight ES.
R

i think th F.S looks like Kairi especially when she looks up to see the soldier like in everybodies avaars and the image above
R

The ES looks more like Siax to me. His hair, his face, and his eyes that go yellow.
D

I see similarities between Axel and the E.S. but not Larxene and the F.S.
B

Maybe, maybe the ES could the whole version of Axel. Remember how Axel had become whole again instead of being eliminated?
O

Location
In your pocket.

If it were true, that'd be pretty interesting.

Location
If I only knew...

The FS & Larxene are entirely different. In looks, and personality. Through the vid, you can see that the FS is kind and caring. Larxene is the complete opposite of that.

I can't see what you mean about ES and Axel. They don't look alike to me. Besides, Axel was relatively weak... compared to some of the other members. The ES is most likely very powerful(despite being pwned by the OM). The ES' Nobody would more than likely be as powerful as Xehonart's Nobody.

it cud very well be axels human form. nd he may hav been weak, bt he is a fan favourite. my favs were xaldin nd xemnas bt its very unlikely to be them.
Z

Well..I don't know.Not really though.But I do think that Axel comes back..but not as ES.And yeah..as liso already said Larxene are really opposite to FS.And she doesn't look like FS.Anyhow..this was my opinion.
K

I thought ES looked like Axel aswell, though I'm sure to myself its not him. I always say to myself that Axel has found peace somewhere now.
P

I think Axel resembles the E.S as well. Their eyebrows are alike, and so is their face structure. I definately won't exclude this possibillity.