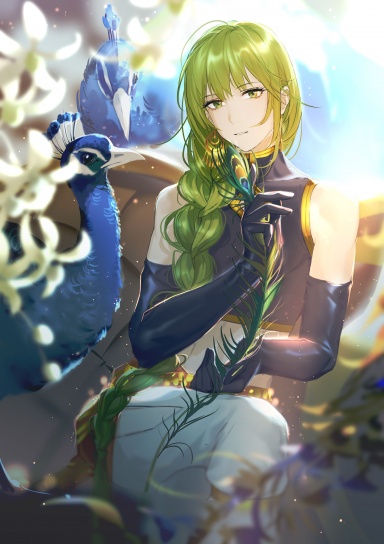 A question for you...

What is the purpose of life?

You. Are. Not. DESPERATE.

--to those whom were poor.

The purpose of life...

Becomes a quest to escape from this tiresome poverty.

--No matter what the cost!

-Sometime in the future-

The youthful man said to himself as he saw one of the numerous billboards of the upcoming massively multiplayer online game or MMO. In this future, MMO's have been a secondary part of society; not just as an escape from reality itself, but also as a universal medium of communication. It was even speculated given more years to come, and the virtual media will eventually render smartphones obsolete.

That said, with the uprising of MMO's, the virtual entertainment became a media superpower to rule others. As it already made sports almost an afterthought with the medium itself becoming recognized by the International Olympic Committee. And with the use of state-of-the-art technology, E-Sports have been made not just for mental but also for physical activities as well.

"Hmph. Been there, done that. I can't just jump ship anytime soon."

The young man scoffed as he disappeared through the bustling city crowd. Twisting both his sleeve buttons, he set his jacket to waterproof mode as the rain began pouring upon the neon metropolis. From the beautiful neon sea then unto the humble suburban quarters, the young man went back to his home, back from his grueling graveyard shift.

The bedridden old woman slowly sat up from her bed to greet her grandson. The Teowol residence, a humble family of Korean immigrants overseas. They have been living upon the suburbs for almost a decade, until the real estate forced them out of their residence and were forced to live upon the cramped outskirts.

"Well same as always, but look at this!"

Hyun-jin pulled out a credit envelope filled with three silver with one gold credit cards.

"This is my pay with one gold credit. Pretty amazing, ain't it, grandma?",

The old lady tried to muster up the excitement for her grandson, but just fell short due to her physical illness.

"I know it isn't enough to buy you medicine or get our house back, but with this I can at least put food on the table for the next three months.",

"I appreciate your efforts, Hyun-jin. Ever since your mother passed away, you have been working day and night to keep us afloat. Don't mind this dying old woman, just having to eat with both my grandchildren is enough.",

"Grandma, don't just say 'dying' so casually like that.",

"Hah hah... but you know it'll come eventually. I'm just a burden to you and your sister, so I'm telling your right now when the time comes, I'll die a happy woman to see my grandson standing up on his own two feet.",

"If you still have the energy to joke around grandma, then you'll still be fine around 10-20 years. You're not going to die without attending my wedding first.",

The grandmother and grandson went on with their lunch, continuing their conversation over the table.

"That reminds me, where's Yeon? Did she already went to school?"

Hyun asked as his sister came to mind. Since he worked at graveyard shifts, he and his sister rarely saw each other for the last 4 years. She was currently at high school but her personal matters were still unbeknownst to the rest of her family, much to her grandmother's worry.

"She went off early today. Honestly, I am quite worried about Yeon. She's been quiet for months now and we barely talked to each other. I'm worried she might be talking to delinquents or worse."

She voiced her recurring concern about Hyun's sister, but as always Hyun-jin would just shrug off the matter.

"Heh, well knowing her I would pretty much doubt that 100%. She's a strong woman like umma (mother), she can stand up for herself."

A word of reassurance from Hyun to his grandmother. Though half-hearted as it may sounded, he trusts her enough to avoid such mundane adolescent troubles. After they finished their meal, Hyun quietly went to his small bedroom to doze off for the day and prepare for his next shift.

Walking to his room, he saw his PC or Personal Computer and just sat in front of it. As he turned it on, he saw something stuck under the keyboard. There stuck a dusty old ticket, it was scratched and faded as it just lied there for 2 years.

"The Fantasy Grand Prix... Ah yes, those were the days."

He muttered as nostalgia washed over him. The Fantasy Grand Prix, the biggest E-Sport event the country has ever seen featuring the game, Theras Online, a high fantasy-themed MMO. Him and his guild were the champions for the event for 5 years straight before finally quitting the game entirely.

"--to think, we were literally one event away from reaching the International Virtual Olympics."

Nostalgia went in tandem with disappointment, he remembered the eventual downfall of his own guild. Just like most popular groups, their guild had a massive falling out; most of its members drunk with their given accolades and honors, that they began to develop vices and bad habits. The result was them neglecting their duties completely before finally leaving altogether.

News of their break-up spread throughout the net and gaming forums, which sparked numerous rumors and bad rep which costed them their eligibility of joining another e-sport event.

"Hmm... Maybe I'll just take a look at my account one last time."


User: Gilga-0
Password: *************​
Entering his credentials, Hyun pressed Enter and logged in for the first time in years. After loading up, there it was, his player character standing as proud as it was in the beginning.

Level: 1000​
As the player character's model rotated, Hyun scrolled through its overall stats and once again awashed with nostalgia.

Looking at his character achievement sheet, the player character itself already filled all passes and achievements that can be acquired in game. Unlike his former guild, his was the strongest character in their roster. For that he was offered the position of guild leader many times, and would decline them every time it was brought up.

"Maybe I can just set this account up for auction online. If I can't use it anymore, maybe I'll make some money out of it."

Hyun then quickly pull up another tab and opened the central online auction website. Making an account for the site, he typed furiously as he filled up every field of credentials required. And then finally, uploading his character file in-game unto the website's bid window; thankfully the site offered a feature where the buyer can view the character in-game in real time but with strict limited access, just for the sake of confirmation.

"Alright all set up, then 'Request Auction' sent. I need some shut-eye..."

After uploading his auction entry, Hyun quickly shut off his computer and just slept for his next shift. But little did he knew, what awaited him when he wakes up. His auction entry, as soon as it was uploaded, began brewing up a perfect storm upon the internet.