As the game is not released yet, I will try to keep this as short as possible since there really isn't much evidence at this point, and this is mostly just my gut feelings, but I wanted to get it out there nonetheless.

In any case, I feel that one of the big reveals in Dark Road will be that Xehanort was in possession of one the copies of the Book of Prophecies. With the revelation in KH3 that Scala ad Caelum was built on the ruins of Daybreak Town, we can assume that whoever created Scala, was probably from the time before the Keyblade war, either one of the Foretellers, or one of the Dandelion leaders, both of which were in possession of copies of the book. We can probably also assume that whoever created Scala and populated it with Keyblade wielders would have wanted those wielders to carry on their Legacy into the future. Going off of what we know right now, I think we can speculate that Brain is the one who created Scala, and that he passed down the Book of Prophecies to someone in order to carry on his mission given to him by Ava to change destiny. Whether or not that person was Xehanort remains to be seen, but the point is that it's likely that the book was in Scala during the time that Xehanort was a student there. Whether the book was given to him, or Xehanort stole the book, there's evidence already that he at least was aware of it's existence and knew some of it's contents. Namely, the famous passage on the last page of the book "On that fated land, a great war shall transpire. Darkness will prevail, and the light expire." One could speculate that perhaps, their master at the time was the owner of the book and had educated his students on the subject, evidenced by Xehanort's line "A prospective keyblade master should know this." However when Xehanort asks Eraqus "Have you heard of the Lost Masters", Eraqus replies "Never heard of 'em." Which would seem to suggest that Xehanort was aware of passages in the book that Eraqus was not. Although it's also possible that Eraqus was simply just a poor student compared to Xehanort. Whatever the case, I'm going to go out on a limb and say that Xehanort was in possession of the book at least by the time his Mark of Mastery exam was over and had left Scala to begin his path as the Dark Seeker.

The second reason I think Xehanort was in possession of the book, is because of the strange nature of the Toy Box world in KH3. What seems to be apparent is that the Toy Box world is an artificial copy of the actual Toy Box world. We know this as the characters inside the world are aware that certain people who should be there (Mom, and Andy) are no where to be found and that strange things are happening, such as Buzz Lightyear being able to actually shoot lazers from his arm (which he could not do in the real world). By the time you leave the world, Sora has to appologize that he wasn't able to figure out a way to get the Toys back to their real world. When you encounter Xehanort in this world, his lines suggest that he is in fact the one who created this reality. When you first encounter him he says "I have more to observe, I can't let you leave yet." After Buzz gets possessed by a heartless he goes on to say that "I am testing the strength of their bonds. In this world, toys have hearts. And those hearts come from a powerful bond. So what happens when those bonds are stretched to their limit ? When they are Worlds apart, can cloth and plastic hold on to their hearts ?" I believe the bonds he is referring to is the bond between the toys and their owner Andy. If his intent was to test their bond by separating the toys from their owner and placing them in a fabricated world, then that would mean that Xehanort would have had to be the one to create that fabricated world in order to carry out his experiment. So the question becomes, how did he create a copy of an entire world to his specifications ? I believe the answer is the Book of Prophecies. I think he used the book to create a projection of the actual Toy Box world, in much the same way that the Foretellers created projections of worlds during the time before the keyblade war.

And that's pretty much all I have for now.

There are also some other small clues, such as YMX's tagline "it is etched" which he uses when referring to events which were foretold by the BoP. It is a line that Maleficent also used when asked by Pete how she knows about the black box, implying that the reason she knows it exists is because it is mentioned in the BoP.

Another interesting concept is that the act of creating the Toy Box world may be what also caused Yozora's world to exist in the first place. By creating the Toy Box world, Yozora's world was also created by extension, due to being a fictional world which existed within Toy Box (Perhaps Dissidia NT was also created as well and this is why FF characters exist in KH, although this wouldn't account for characters such as Wakka, who aren't in NT, yet?). This would explain how Sora was able to travel to this world, despite it being only a "video game". It was simply part of the projection created by the BoP.

So what do you guys think ? Did Xehanort have the Book of Prophecies ever since he left Scala ? If so, did someone give him the book, or did he steal it ? Did he have to kill someone for it ? Did Eraqus know he had the Book ? These are all questions I think we will get answered in Dark Road, so I can't wait to find out

I suppose then this serves as the method of providing Disney worlds in the game?


Zetsumei said:
Another interesting concept is that the act of creating the Toy Box world may be what also caused Yozora's world to exist in the first place. By creating the Toy Box world, Yozora's world was also created by extension, due to being a fictional world which existed within Toy Box (Perhaps Dissidia NT was also created as well and this is why FF characters exist in KH, although this wouldn't account for characters such as Wakka, who aren't in NT, yet?). This would explain how Sora was able to travel to this world, despite it being only a "video game". It was simply part of the projection created by the BoP.
Click to expand...

Does this also explain the Mickey clock in Andy's room? 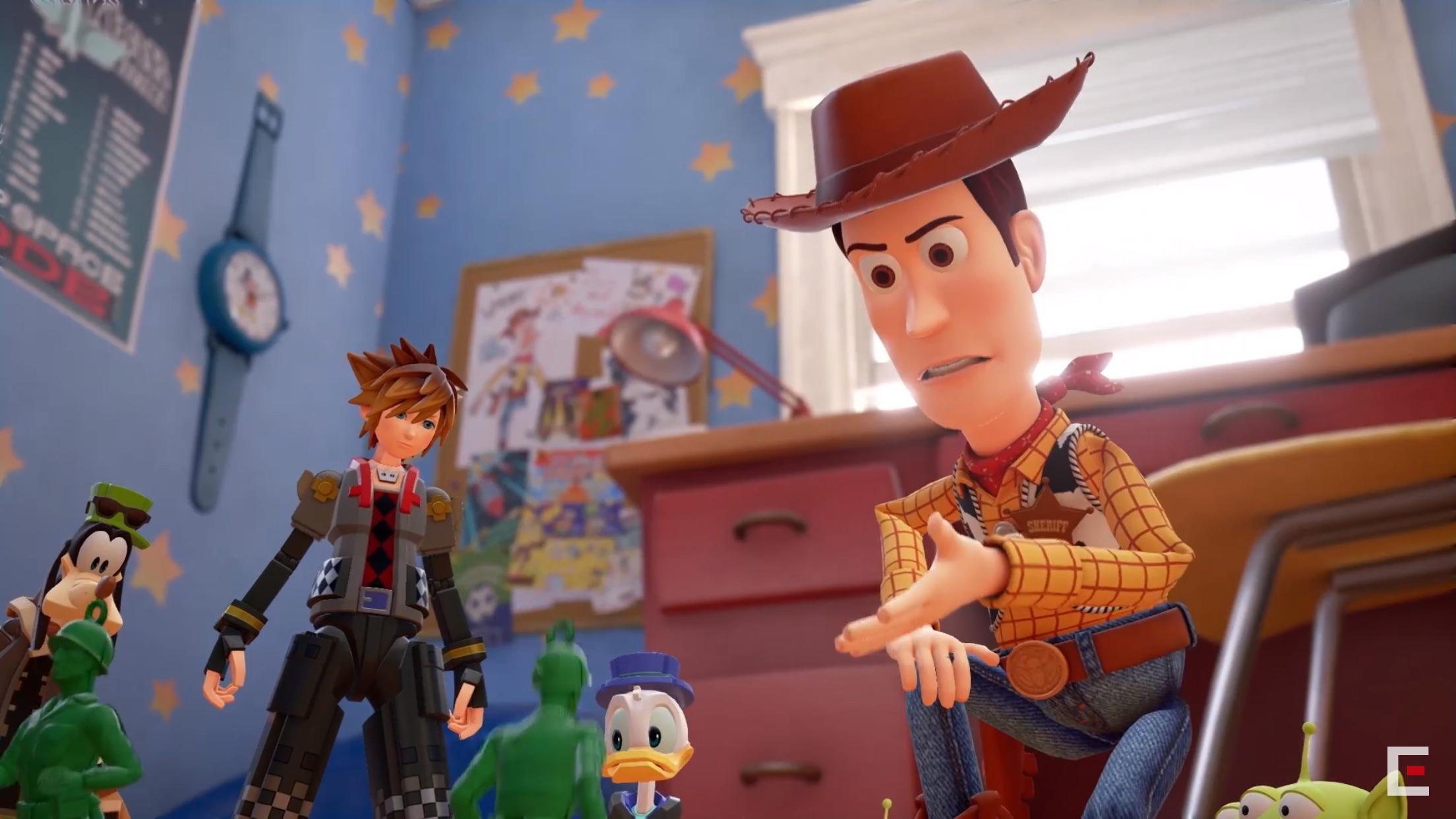 Wasn't Eraqus just playing coy? Xehanort calls him out and tells him to "drop the facade" later in that conversation.

Sign said:
Wasn't Eraqus just playing coy? Xehanort calls him out and tells him to "drop the facade" later in that conversation.
Click to expand...

I did get that impression as well, though the fact that Xehanort even asked the question suggests that it may have been information that they weren't supposed to know about. It's like Xehanort had read passages from the book that he wasn't supposed to and suspected that Eraqus had as well, and was proding Eraqus into admitting it.

All of that is conjecture of course, so it's hard to say one way or another what the actual context of the conversation is. Hopefully, that context comes sooner rather than later in Dark Road.

Either Eraqus had access to the Book of Prophecies because he's a Blueblood, or Xehanort disobeyed their Master's prohibitions and accessed the Book, but Eraqus knew because he was going to be handed the book in a near future.