News ► New NEO: The World Ends With You artwork and screenshots released

Square Enix have released a new batch of artwork, screenshots and info for NEO: The World Ends With You! This time, we check out a new keyart of the Wicked Twisters by Gen Kobayashi, an introduction to the rest of the Shinjuku Reapers, various game mechanics including a look into Nagi's Dive ability, and some more pins!

New artwork of The Wicked Twisters by Gen Kobayashi 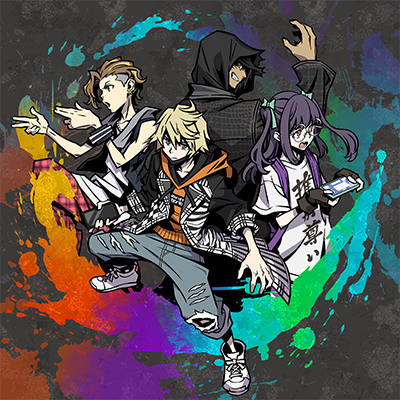 The Reapers manage the eponymous Game and give missions to its Players. The current Game is being run by a gang of Reapers who came to Shibuya roughly three years ago. Unlike the previous Game, this iteration requires Players to group up into teams to participate.

Shiba and the rest of the Shinjuku Reapers left their home after it was destroyed three years ago, ultimately taking refuge in the neighboring city of Shibuya.

Reapers native to the Shibuya area like Kariya and Uzuki have been tasked with monitoring the Players.

Ayano (Voice: Erin Yvette): “What an unpleasant surprise. Come to ingratiate us again with your ill-gotten intel?”

A Reaper managing the Reapers’ Game. One of the elite Reapers, Ayano is highly capable and implicitly trusted by her leader, Shiba. She is cold and ruthless toward others—except her fellow Reaper, Shoka, whom she dotes upon in a near obsessive manner.

Kubo (Voice: Xander Mobus): “So fight like your lives're on the line– figuratively speakin', seein' as you're already dead... Nyeheh!”

A Reaper managing the Reapers’ Game. His obligations extend to both the micro and macro levels, monitoring individual Players as well as determining the outcome in win-lose scenarios. Yet in spite of these duties, he spends quite a bit of time chatting with Rindo and the gang…

His words drip with condescension, causing many to dislike him. In fact, the only person to whom he shows any respect is his leader, Shiba. “

One of the Reapers who runs a fortune-telling shop on Spain Hill while also managing the digital system behind the Game.

Expressionless and seemingly voiceless, he communicates exclusively via text. In messages, however, he’s extremely talkative, revealing a cheerful and caring side.

Hishima (Voice: James Austin Kerr): “I'd be mortified if I were caught abiding by outdated protocol.”

One of the Reapers who rarely gets involved in the operation of the Game, claiming that his heart isn’t really in it. Despite his intellectual appearance, he reveals himself to be both sarcastic and stubborn when he opens his mouth.

Somewhat of an odd Reaper out, he’s a man of mystery: even his comrades can’t discern whether he has some sort of ulterior motive. 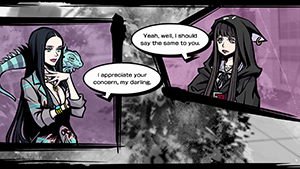 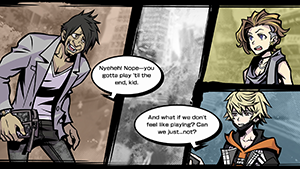 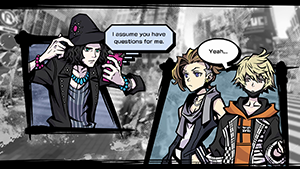 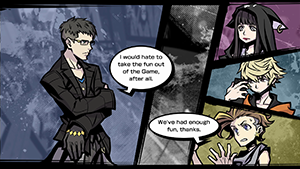 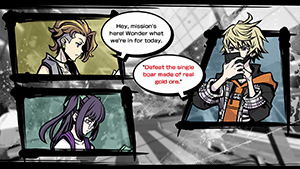 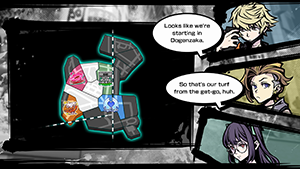 Rindo and the gang will undertake a wide variety of missions throughout the Reapers’ Game. Their objectives will differ from day to day: sometimes they might be solving mysteries going on around town, while other times they might be facing off against Boss Noise, or even taking part in a turf war against other teams.

Put your psychic powers to use in completing these missions! 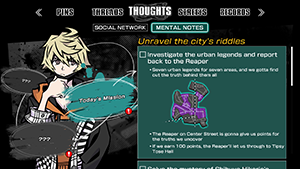 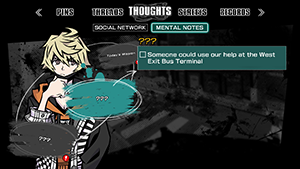 Game progress and mission details are all recorded in Rindo’s Mental Notes. Give them a glance if you’re unsure of what to do next.

Available side-quests and info on where to start them are also listed in the Mental Notes. Check them out between missions! 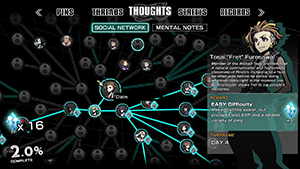 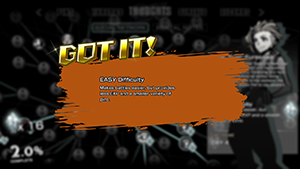 The Social Network menu holds information on just about everyone Rindo meets. Fulfilling certain criteria for each character will unlock rewards, including helpful items and abilities that give Rindo and the gang a leg up in the Game. Which rewards you unlock is all up to you.

The Social Network is like a relationship chart. As you progress through the story, new characters and connections will appear.

Rewards are obtained in exchange for FP (Friendship Points), which are awarded as you progress through the story and complete side-quests.

Nagi uses a special psych, Dive, to enter into people’s minds. Use it to fight and exterminate the Noise within and bring the afflicted folks back to their senses.

During Dive battles, your surroundings will be different from usual, and you may encounter Noise with special emotionbased powers.

Dive on Normal difficulty or higher to gain rewards based on your battle results.

Rindo and the gang can unleash all kinds of psychs depending on the pins they have equipped. Press the button corresponding to a given pin, and the character it’s equipped to will instantly perform an attack. Time your button presses to attack consecutively or all at once. String together combos or perform simultaneous attacks any which way you like!

Find your perfect fit from a wide array of psychs, which can launch enemies into the air, knock them back, bind them, draw them in, attack swaths of them at once, and more!

Increase the party’s Groove by coordinating the team’s attacks, then unleash a Mashup and inflict huge damage on the enemy.

If you hit an enemy under the right conditions, a circular Beatdrop gauge will appear. Striking while the gauge is shown will initiate a Beatdrop combo, and the Groove displayed at the top of the screen will increase.

Later in the game, you’ll be able to increase the Groove even further by dropping the beat at just the right moment. If you carry out combos with perfect timing, you can quickly increase Groove and control the flow of the battle.

Once your Groove reaches 100% or more, you can unleash a Mashup—a super psych with impressive range and power—to erase your foes in one fell swoop!

There are several different types of Mashups, and the skill you unleash will depend on the psychs you use in battle.

As you progress through the game, the maximum Groove will increase to 300%, and you’ll be able to unleash team attacks that are even stronger than Mashups!

Killer Remixes can only be used at 300% Groove, but they boast unrivalled power. Annihilate your enemies with rapid button presses!

Sugar Beam: Allows the wearer to use Force Rounds, a ranged psych that shoots barrages of eight bullets, the last of which is a piercing shot.

Marvelous Crash: Contains the Meteor Strike psych. Hold down the button to summon a giant boulder, then release to slam it down on an enemy’s head!

talk about a glow up 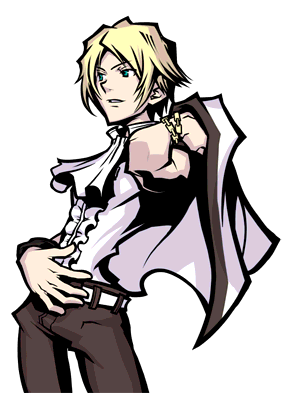 Looking forward to seeing how the rest of the Shibuya folks look. Maybe Shooter and Yammer are helping out newbies players in Tin Pin Slammer or trying out a new game.

Also, that new artwork would look pretty awesome as an album cover for the OST

The more I see about this game the more excited I get. I'm really digging the design direction, seems like the natural expansion/evolution of what the original had.

Eiji’s glow up is phenomenal

In other news, Nomura is teasing something for tomorrow. 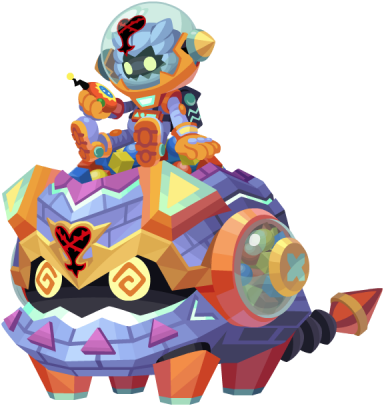 The game is looking great, I can't wait for July!

Sign said:
In other news, Nomura is teasing something for tomorrow.

Probably the final trailer. And/Or maybe a demo