origin of the middle finger

during the middle ages, there was old weapons tecnology, u know long bows cross bows and so forth, well in the middle ages if a archer of the long bow got caught by the enemie, they would get thier pointer finger and thier middle finger choped off (they cut those fingers off because those fingers are the one that pulls the string back so it was a very important fingers) so when they got choped off they could never shoot with the long bow again, well
in the hundred years war (in europe)there was a battle (can't remeber the battle)and when the battle was finished, the wining side put there pointer finger and middle finger up at the same time to show they still have thier fingers cause they didnt get captured (and it was also to show the losing side ha ha nah nah u suck =P) so anyways from then on it was a sign of offense witch evolved to just the middle finger we all know and love and use verey often

LOL. awesome. how'd it turn from a victoy sign into an insult?
S

so miserable is our love

ehh who knows how it turned out to be an insult finger... LOL
M

That's What She Said

Well, I never heard this story before. I'll have to ask my history teacher. My Hsty teacher is a genious. Not only does he teach our top high school classes but he also teaches at Sacred Heart University in CT, USA at nights. He knows EVERYTHING about history. 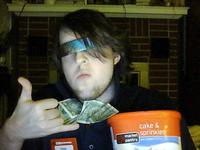 I learned about this awhile ago...I was actually contemplating making a thread about it, but you beat me to it...

Hey Hey! My best friends history teacher told them(class) that too!
do you live in illinois obsessed fan?? cook county?
if so i might know you! ^ ^
O

LOL that is funny
A

I did not know that but it does make sense if you think about it.
K

Location
Somewhere up high...getting ready to snipe your as

'Hey, we know the same peice of information, LOLZ! Here's my location, do you live where I live/!? Lolz, i bet u do since we both learned the same thing from our teachers *teeheehee*, I think i might know you ^ ^ *has seizure*'

Location
in ur room wit ur mom go check!!

Location
somewhere and nowhere at the same time

that was so funny!! My teachers never teach me that!!!
U

Location
Right, i'm leaving on the roads that lead to my fl

'Hey, we know the same peice of information, LOLZ! Here's my location, do you live where I live/!? Lolz, i bet u do since we both learned the same thing from our teachers *teeheehee*, I think i might know you ^ ^ *has seizure*'

Go jump in a bathtub full of staples >_>
Click to expand...

LOL. that was an awsome! No offense kandy
C

Wow I didn't even know that, you have one cool history teacher to teach you that