If you are not familiar with this by now, then I will be very sad. pete:< 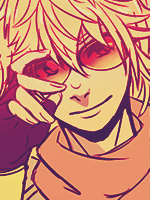 Hybrid? So what exactly do you mean by that?
K

Exactly what hybrid means. This will be a Power/Melee battle, but, when you attack, it must be both types of attacks.

Oh lol. I thought you meant something like hybrid characters(human-dragon, dragon-human lolz). Okies, I should have my temp up soon(I hope).
K

I'll be waiting until then.

Name: Alaric: Godai
Title: Elemental guru; Great Shaman
Age: Eons old, but by physical appearance some assume he is merely 45, but he is old as time
Gender: Male definitely
Race: You could say human, but he prefers the term “God’s messenger”

Appearance; Alaric is quite tall, muscular, and fit. He stands at six feet, six inches. A total weight(with armor included) of two-hundred pounds, and one-hundred sixty pounds(without armor). A body seen as body-builder muscle tone. Alaric’s armor consists of hardened tribal material that can withstand even the hardest of steel. The largest piece is over his head; which is a large skull that covers the majority of his head - only leaving his mouth for public view. Along that skull is a mien of long, gray hair, and feathers along the top, and center of the hair. The other parts of his armor that aren’t really noticeable is his boots, gloves, and bracelets; which are shaded a brown color.

Underneath his armor, Alaric is seen with shoulder-length black hair, and a almost pure-silver shaded eyes; though it’s mistaken to be light gray. He also carries a staff with a design similar to his armor.. A green lantern with an emitting spiritual energy from it is carried in his other free hand, though he usually carries it on his back without the strap he carries it with by hand.

Personality; Over the years, Alaric has developed a sense of nobility in his being. With the title of “Great Shaman” comes acting with a form of responsibility and level-headedness. Though, at times he can be slightly childish, Alaric sees himself above his opponents, and that is what makes him a lethal foe on and off the battle field. His pride is also essential when he greets, or approaches a foe. Not only does great respect come to an opponent from him, but also the fact that he takes the time to acknowledge his opponents’ powers. Through his time as a shaman, Alaric developed a sense to respect how strong his opponent is, and take great pleasure in defeating them while keeping his respect for them.

God’s Staff: A staff that is composed of normal, Earth wood, but shrouded in a malevolent aura that allows magical powers to be used with this staff. A bamboo-like tape is wrapped all the way up the very top. That is where it splits into two top parts: one that curves like a moon crescent, and the other is shaped like a reverse “s” .At the end of both portions is a straw-like material, but in reality it’s the aura that manifests itself as a physical specimen. Along the curved part is green feathers, and bells attached to a tied string that hangs from the center of the curved part of the staff. A brown feather hangs down from the start of this.

Cystal of Lord Brahma; A simple candle light that hangs from the left hand of Alaric. From a string made of the strongest thread, there is a candle with a succulent green orb of spirit energy that shines inside a crystal-like stone. Smoke also emits from it.

Jabe Uju: By utilizing his talents, and overall powers of the Shaman’s, Alaric is able to take control, mastery of the five general elements of the known universe: Air, lightning, fire, water, and earth. He can use these elements in any way he sees fit, and he can call upon their majstic power whenever the notion shall call for it. He can also combine factors of one element, and use it as an aid to another. There is no limit of how much he could use of any element. An unlimited access gives Alaric an endless amount of possibilities for killing.

Lord Brahma’s Gift; By using the Crystal of Lord Brahma, Alaric can call upon the spirits of the afterlife, and command them to do what it is he wishes so. They can act as a shelid from most attacks, or as an offesnive tactic that will evidently lead to the downfall of his opponents. As long as these spirits have successfully passed on into the afterlife, they will be powered with a powerful force when summoned, and they will be very deadly to any on the opposing side. This could be classified as a form of Necromancy, but it’s not nearly as dark, nor is it of the same style.

if u still need a judge then i'm available