It's been 10 years since the events of s-cry-ed. Not much has changed in the lost ground, but it seems Holy has rebuilt itself, and now under a new leader seeks to obtain the power of alter for his own greed. But to do this, that means tampering with the lost ground. Most alters users have tried to either clear out, or protect their territory as Hold envades the Lost Ground, but many power alters are being taken down. However, strange and mysterious "Drifting" Alter users have come out of nowhere, and seem to have much more power than regular alter users. But how they use it depends on the person weilding it, and some just don't care either way.

Okay, and here's the template. You can be anyone from the original series who didn't die, unless they were a really main character.

Rules:
No power playing
Don't corss me
No god moding
no "OFMSDF!?! Ded HE do DaT!>!!>!?"
Romance is allowed. Keep it above the belt.
Join and have fun. 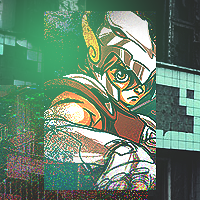 Location
Creating bonds to save our world and bring peace

Template:
Name:Skye Vickers
Age:19
Gender:Male
Alter Name:Redemption
Alter Image: Broad Sword made of Black Crystal. The sword sends shockwaves from it's blade. It also can be turned into a sheild for when he needs defense.
Appearance:He is '5'8 and weighs 189. He has an athletic build. His hair is short. The front of his hair is silver and the rest of it is brown. His eyes are green and he has a pretty boy look. He wears a blue, red and white jacket that is zipped down to the bottom of his chest. He has a white t-shirt on underneath his jacket. His wears black finger gloves.He wears blue jeans. His shoe are blue and white and the shoelaces are red.
Bio: As a child Skye was treated badly because he was an alter. When he was 7 his parents were killed and he was adopted by the leader of Holy. At age 9 he fought a man named Kazuma and Skye was defeated. After being defeated he quit to help Kazuma. It has been 10 years since he helped to take down Holy and now he is on a journey to fight Holy once again.
Last edited: Oct 21, 2005

Name: Meilin
Age: 16
Gender: Female
Alter Name: Illumise
Alter Image:
When Meilin uses her altar, she gains the ability to control the minds of others, but how well depends on their own strangth. She can force them to halluicnate, catch them in thier own wild fantasys, or distract them long enough for a retreat. Her most powerful technique is instituted when she sings. Depending on the lyrics of the song, she can trap her opponent in the highest grade illisions. Her mere voice can kill.

Bio: Meilin is an altar user born in the farthest reaches of the lost ground. For many years, she grew up in fear of HOLY, who'd killed both her parents while trying to eliminate native altars. She oculdn't have been hapier when Kazuma and Ryuho eliminated HOLY forever, and disappeared. Her dearest dream was to become a singer, and Mimori set her up with a recording contract in the cities. But when HOLY returned, she fled to the lost ground to help her friends.
Last edited: Oct 21, 2005
G

The bringer of sorrow

Name:Tai
Age:16
Gender:male
Alter Name:Seal
Alter Power:It is a harmonizing alter it harmonizes with his whole body drawing maximum potential (he pretty much becomes the alter) use imense amount of energy
Appearance: black hair w/ blue streaks blue eyes black and blue jacket blue shirt blue jeans (yeah i know it is alot of black and blue)
Bio:lives alone in a rundown house he has no recollection of his parents or any other family members he fights to live
G